Apology and Realpolitik: The Ethical and the Pragmatic Merge in Italy and Libya

The remarkable agreement between Italy and Libya for compensation as an apology for colonialism sets a very important precedent for the relationship between the Middle East and the West. Salah Sarrar reports:

Libya and Italy signed an accord on Saturday under which Italy will pay $5 billion in compensation for colonial misdeeds during its decades-long rule of the North African country.

“This accord opens the door to the future cooperation and partnership between Italy and Libya,” Libyan leader Muammar Gaddafi said at the signing ceremony at a palace which was once the headquarters of the Rome government’s senior official during the 1911-1943 colonial rule.

Italy has had difficult relations with Gaddafi since he took power in 1969 but has backed Tripoli’s recent drive to mend fences with the West. The “friendship pact” removes a major hurdle to an improvement in ties.

Italian Prime Minister Silvio Berlusconi said the accord ends “40 years of misunderstanding”, adding that “it is a complete and moral acknowledgement of the damage inflicted on Libya by Italy during the colonial era”.

“In the name of the Italian people … I feel the duty to apologise and show our pain for what happened many years ago and which affected many of your families,” Berlusconi said, according to a text on the government’s website.

Libya says Italian troops killed thousands of Libyans and drove thousands more from their villages and cities during the colonial era.

“In this historic document, Italy apologises for its killing, destruction and repression against Libyans during the colonial rule,” Gaddafi said. 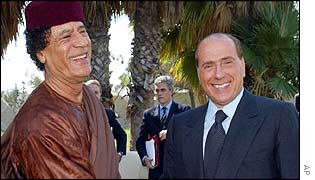 But this agreement, while remarkable for its embrace of apology between nations, has very pragmatic state interests at work, those of Italy and of Qaddafi’s regime. For that reason, Rami Khouri is upset with this legitimation of Qaddafi’s brutal regime and its forty year monopoly of corrupt power. Rami initially embraces its spirit and constructive effect:

History matters, and endures, and its consequences constantly must be grasped, not ignored. In this case, we witness neither the end nor the resumption of history, but the neutralization of one aspect of history as a fractious force of resentment and discord.

For many in the West, history, especially the West’s colonial and imperial history in Asia, the Middle East and Africa, is something to skim through in a high school class, and then to relegate to the past as irrelevant to today’s conflicts and tensions. For many people in the former colonized world, however, history is a deep and open wound that still oozes pain and distortion. Libya is a classic example of colonialism’s twisted and enduring legacy of nearly dysfunctional states governed by corrupt and often incompetent elites, whose people never have a chance to validate either the configuration of statehood or the exercise of power.

History is very much an active force in much of the Middle East today. It manifests itself in the form of bitter memories of the West’s behavior in the past (Iran, Palestine), and also of vulnerable, poor and fragmenting countries that have never made a coherent transition to stable statehood, legitimate sovereignty or credible governance.

The Italian-Libyan agreement is fascinating for what it reveals about a belated acknowledgment in at least one European country – always elegant Italy – that colonialism damaged and retarded the native land and its people. This is a noteworthy and noble act, for which the Italians and their government are to be congratulated. It takes courage and humility to undertake such an agreement, admitting, as Italian Prime Minister Silvio Berlusconi did, “complete and moral acknowledgement of the damage inflicted on Libya by Italy during the colonial era.”

Berlusconi continued: “In the name of the Italian people … I feel the duty to apologize and show our pain for what happened many years ago and which affected many of your families.”

Among the things Italy regrets were its killing thousands of Libyans and uprooting thousands of others from their homes. Italy will spend $5 billion to help compensate for its historical misdeeds, in the form of $200 million of investments per year in Libya over 25 years, including building a highway across Libya from the Tunisian border to Egypt. Italy will also clear mines dating back to the colonial era, and has already returned an ancient statue of Venus stolen during colonial rule.

But then Rami turns cynical and rejects the agreement’s support for self-interest and autocracy:

While Italy should be commended for this acknowledgment and apology, at the same time troubling dimensions to this agreement deserve wider scrutiny. In return for its gesture, Italy expects to reap great rewards, in the form of multi-billion dollar contracts and tighter security controls over flows of illegal immigrants. It will continue benefit from an unequal historical association with the land and people it once directly colonized.

Equally troubling, such agreements help to maintain in power leaders like Libya’s Moammar Gadhafi, who next year celebrates 40 years in power, with very little to show for it other than a legacy of intensely erratic and wasteful governance matched only by its longevity. If there were a prize for modern Arab mismanaged statehood and squandered wealth, Libya would win it hands down, with close competition from countries like Algeria, Sudan and Iraq.

But Rami Khoury cannot have it both ways. States and regimes will always act in their own interests. This will not change. The key challenge is how to move very imperfect systems of injustice and outright violence to less violent and less unjust arrangements. Surely, it is better for the people of the West to be exposed to this new acknowledgment of colonialism’s devastating impact and the need to make up for that legacy. Surely it is better for Qaddafi to make his case for Libya in this way, rather than through an embrace of terrorism. Investment and an open relationship with the developed world is likely to lead to more and more freedoms for the people of Libya, which in turn will lead to greater and greater consituencies of youth who can nudge their elders toward greater freedoms. Evolution not revolution is the key to regime change in the Middle East and greater humility in the developed West.

The beauty of the agreement is also that it embraces key elements of Islamic and Arab conceptions of Sulha, namely apology, acknowledgment, compensation, and the beginning of a new relationship. I have just returned from an entire gathering of Palestinians and Jews dedicated to this. Hopefully we can see more and more gestures between the Middle East and the West that embrace this most pragmatic and ethical form of reconciliation.