I have a friend, Bryan Hamlin, who has been an amazing citizen diplomat all his life, who helps entities in conflict understand each other, especially at critical hours. What I mean by ‘citizen diplomat’ is a person who takes it upon himself to build relationships between enemy groups, or between his own culture and a culture with which he or his country is in conflict. My next book, To Make the Earth Whole, will deal at great length with citizen diplomats because I believe they are the hope of the future, inching the globe toward greater integration, cooperation, and community.

Bryan had two great pre-occupations of his career as a citizen diplomat, the Palestinian/Jewish relationship, and the Russian/Western relationship. He chose wisely, for these remain the deepest challenges to the future of humanity. What we have seen in Georgia proves this.

One of the most exhilarating moments of my younger years was watching Boris Yeltsin, future President of Russia, on top of a tank challenging the Soviet Union to radically change, and resisting a Communist attempted coup. 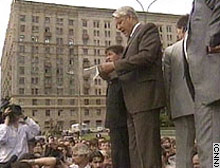 During an August 1991 coup attempt, Yeltsin stands on a tank urging the crowd to resist the hard-line Communists trying to depose Soviet leader Mikhail Gorbachev.

At that moment Yeltsin embodied all the noble Russians in the history of the twentieth century, from those who stood up to the Czar to those who stood up to the Communists, all longing for dignity, freedom, and equality. And, conversely, I had a bad feeling about George Bush praying with Putin. It had the feeling of a con game, and, of course, there was a history of Mr. Bush’s knack for choosing violent men to be on his team.

Now we stand before petrified Baltic states, and it is sad to see. Recently I had some interactions with the world of conservative Russia, and I realize how deeply we neglected the challenge of engagement with them, how contested is the language of human rights, how much it is often reviled as a Western European trick, an American imperialist invention, how closed in the world of religion is to change.

The typical American response will be armament, and we may see this as the great new cause of American conservatives, “standing up to Russia’. I do not deny the importance of defense of Central Europe, but this will be the ‘same’ole same’ole’: ‘They’ provide ‘us’ with another excuse for a permanent military-industrial complex and military escalation. Great economic profits for a few that will just sink us globally.

What we need to do as global citizen diplomats is to launch a massive diplomatic effort to engage Russians, especially conservative Russians, in conversation about democracy, human rights, and international cooperation. And the conversations will be very tough, but the relationships are bound to flourish, as they always do when the effort is authentic. As usual, the conversations if they are good will change us as well as them.

We should have been investing in this massive effort since the Berlin Wall came down but we did not. We just thought as nice fat American capitalists that it was just wonderful to see an evolving Moscow culture of fat capitalists. And we thought, ‘You see, we won. They have come over to our way’. I watched so many people watch this unfold on Fox News, with such an obscene sense of satisfaction. Democracy did not matter, it was wealth in Moscow that was the great messiah.

This was arrogant and unfair, and now we are paying a price for thinking that big international business would change the dangerous relationship between Russia and its neighbors that goes back many centuries. I am not against private enterprise at all, but I am against its deification.

No, the only thing that will transform that relationship between Russia and its neighbors, that will make aggression and bullying a thing of the past, is a cultural/economic transformation along the lines of the European Union. There has to be some new set of entities and relationships created between Russians and their neighbors that will make bullying unthinkable, just as it is now between Germany and its neighbors.

The evolution of state relationships in a positive direction is not fantasy. It happens all the time. But it does not happen on its own. Never. We have to make it happen as we evolve our thinking and behavior, and that is the great challenge of Europe and the United States as it faces this massive Eurasian entity called Russia. New thinking is required, and millions of new relationships must be engaged.