“None but a noble man treats women in an honorable manner. And none but an ignoble treats women disgracefully.”
– The Prophet Muhammad (At-Tirmithy)

Last year, I was approached by MarcGopin.com to write a column focusing on positive incremental change.
While I am always in favor of an optimistic approach, I confess that it is sometimes hard to remain positive. This is especially difficult considering the many challenges women – and especially Muslim women – continue to face in establishing and preserving their rights.

For example, it is true that the tribal practice of honor killing – in which women are slain to restore the “honor” of their families and communities  –  is not exclusive to Islamic societies and even existed in pre-Islamic times. However, it is also true that the perpetrators of these crimes are often Muslim – and their victims, numbering in the thousands each year, are Muslim women. Some who have lost their lives for “honor” are victims of rape – punished for “impurity” rather than supported in mercy.  Many girls and women are still forced into marriages, barred from receiving even the most basic education, maimed with acid, and treated as second-class citizens.

While these stories seem overwhelming, hope lies in our past and in our present. 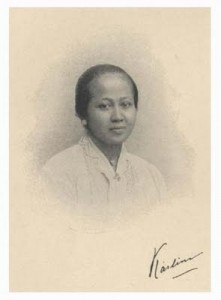 Over a century ago, a young Muslim named Raden Ayu Kartini used her  voice to empower women in her own society. To her, the full empowerment of women – half of God’s creation – was essential to preserving basic human dignity.

Kartini’s now famous letters called for the equal education of women (she also founded a school for the education of girls), the cessation of forced marriages, and the full autonomy and legal equality of women. Kartini also aptly noted that “religion must guard us against committing sins, but more often, sins are committed in the name of religion.” While critical of the way her faith was practiced, her views did not prevent her from a fervent belief in Allah and a devotion to Islam.

Since Kartini’s passing, her legacy has inspired generations to continue raising their voices for the full equality of women. In fact, Indonesia recognizes her annually on “Kartini Day”; and her letters remain a call to critical thinking for Muslims.

Many of the issues Kartini raised at the turn of the 20th century are urgent concerns we have yet to resolve.  As we usher in a new decade, we find ourselves in a world smaller than that known to generations before us. No one can claim ignorance to the suffering of so many. Kartini’s mission to protect women has never been more pressing.
Many Muslim women are actively working for the improved status of women and girls. Their work is both demonstrative of positive incremental change and a source of hope and inspiration.

Each month, this space will feature a feature a Muslim woman working for positive change throughout the last decade.  When possible, my column will introduce you to these women via interviews I’ve had the opportunity to conduct with them. It is my aim to share with you not just the stories of well-publicized figures, but also to highlight the lesser-known heroines within the Muslim community.  The pursuits of justice and knowledge engage the best traditions of Islam – traditions women have long championed.  The women featured here have each taught me something about resilience and hope in the face of monumental challenges. I hope these stories do the same for you, inspiring positive change for the next ten years and beyond.

See you next month!

Links to check out:

* Al-Azhar Document on the Protection of Women and Children

* Arabs and Muslims Against Honour Crimes

* The Global Campaign to Stop Killing and Stoning Women

* Musawah for Equality in the Family

Raquel Evita Saraswati is an American Muslim activist and writer whose main interests are religion and human rights, conflict resolution, women’s issues and democracy. She has lectured and published internationally on issues regarding women’s rights, honor violence, and the role of women in transforming the Muslim world. To contact her, visit her website.