Men and Women in War

“Force protection”. A clean phrase, and its cousin “collateral damage”, that actually mean together that today, men don’t get killed in war much. The vast majority of the dead and wounded are women and children. From Syria to Gaza, from Afghanistan to Congo. The luckier women escape the bombs aimed at them, the luckier ones escape the rape aimed at them. They are merely left to care for abandoned children who have lost their food and lost their minds. People think that ISIS and Boko Haram are the great evil of the world against women, formerly it was the Taliban as the great embodiment of evil against women. But in truth, they are just the caricatures, the showpiece cowards, who flaunt their insanity. The truth is that the entire modern construct of male war is an act of cowardice, where the majority of victims are women and children. Men have become cowards hiding behind their masks and their armor and their artillery. Let’s face it, the age of men’s honor in war is over. Now it is the women who have become the valiant and the fearless, shuttling back and forth across war zones to protect the children and whatever is left of life. Women of war zones need to rise up together, as the Liberian women did. They must humiliate the men, as never before. This works. Taboo, shaming, is a powerful form of nonviolent resistance against barbarism in the history of conflict mitigation. They must shame their men, and they must shame us, the bystanders and enablers. 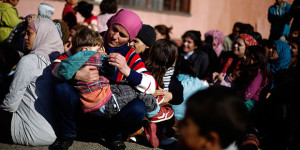