Nonviolence and Violence, the Shocking Difference

For decades, there was hardly any opening in this strong police state to train and plan for creative and steadfast nonviolent social change. Some of us as peace activists did our best to introduce even the mildest ideas of social change at great personal risk to our Syrian friends. For over ten years I had been working steadily in Syria with Syrian partners on interfaith diplomacy and peacebuilding. We built bridges between both average people and between influential people across the spectrum from Alewite, Sunni, Shiite, Catholic, Protestant, and atheist. We engaged in what nonviolence practitioners refer to as exercises in solidarity.

We built a cadre of students in conflict resolution from young to old, inside and outside the government. We did this work with the grudging permission of the regime, through clever strategies of diplomacy. We also enjoyed the friendship of some Western states and individual American diplomats.

We also were met, however, with outright hostility by neoconservative forces in Washington who at the time only saw military options for Syria–after they finished with Iraq. But history has proved that the military “successes” in Iraq and Afghanistan were in fact among the greatest debacles of modern American foreign interventions.

Today, however, Washington interventionists who have traditionally supported military options do not know which way to turn. We now have a perfect storm of chaotic jihadi madness together with the madness of Bashar’s forces of bloodletting on the ground. 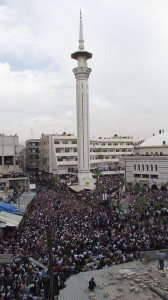 Even the most confident military interventionist who has any sense of the progression of the last two years, now looks back to the heady days of massive nonviolent Syrian protests and sees it through a Gene Sharpian lens. The lesson that jumps out is awesome and chilling: the Syrian people, now completely devastated, were so powerful back then! Just recall the scenes at those demonstrations in the spring of 2011. Remember a people who had been silenced for forty years, so much so that none of us dared whisper to each other in restaurants and houses. Now they all were speaking loudly and confidently about their future. This was the voice of a people happy to be coming alive. And then he shot them at every demonstration, then he tortured the children. But the clerics kept telling everyone to go out on Friday and demonstrate, that these were martyrs and they must continue to get shot. Those who longed for the Assads to finally fall could not resist the power of those crowds, could not tell them to back down.

I remember at the time discussing this with my most trusted Syrian colleagues. We felt intuitively that the crowds should step back, that they had achieved an enormous victory, they had created solidarity, they were as morally superior to their regime as any crowd had ever been in history. They had gained much, and now they could go home and plan for the next step of a Syrian evolution toward an open society. The Assad clan would never again be able to claim absolute power and control. But this was not to be.

The moral outrages added up dramatically and the legitimate sense of injustice demanded a response of self-defense for the sake of all the martyrs. No one doubts the right of self-defense, the moral justification, but if any had seen a Sharia court executing unbelievers in Aleppo two years later, would they have taken up the gun? But this is exactly what nonviolence theory predicts, the dictators want you to take up the gun, they want you to leave nonviolence to lose on the battlefield, not only to lose your land and life, but more importantly to lose your soul. That way their regime is no worse then anything else, and then everyone stifles their moral outrage at the regime and sheepishly walks home.

This is what dictators and regimes always want, and this is what they got. They got it for one simple reason: the world is still not ready to support brave citizens, quickly and decisively, who choose nonviolence, not the gun. The world still is slow to understand the superior power of the nonviolent human being, the nonviolent heroic challenger. And so the powerful nonviolent social change agent is replaced quickly with a weak man, harboring untrained anger and touting a poorly manufactured gun. But change is coming to a globe that is only slowly beginning to understand the power of the nonviolent warrior.