The Night that My Sister Stopped Breathing…and I Did Too. 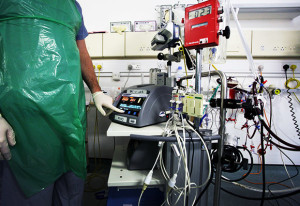 Some of you have followed the intensive and life changing events this winter for my sister, and you supported me and her throughout that process. To me it was a profound spiritual awakening. I have always led a life of over-empathy that sometimes gets me into trouble. Someday I will write more on the experience. Suffice it to say now that I discovered during that time the best and worst in human nature, who disappears from your life and who appears, who are the quiet heroes of this world, and how a completely unconscious sister can inspire you on death’s door.

Here is a wonderful article about my sister from a doctor/writer on duty that night, wonderful person who is part of the amazing Mass General Hospital team that worked on my sister in those months.

One night, in February, a group of intensive-care-unit doctors and I sat down with Marc Gopin to talk about his sister. For nearly a week, after a bad case of the flu, Reissa Leigh had been dependent on a respirator. Her lungs had been badly damaged, her oxygen level was dangerously low. Gopin steeled himself to hear us say that we had done everything: his sister was going to die. Instead, we offered one more option: a bypass machine for a process called Extracorporeal Membrane Oxygenation (ECMO) that would draw blood out of his sister’s body through a large catheter, add oxygen and remove carbon dioxide, and then return the blood back to her.

Gopin pulled out his smartphone and tried to quickly learn a bit about the procedure. He found one ECMO survival statistic, somewhere around seventy per cent. Her chances would be lower otherwise, he thought.

Watching Gopin, I found my hand moving to my own smartphone. I, too, felt anxious aboutECMO and wanted some digital reassurance. Would Leigh get better with ECMO? Was her death guaranteed without it? I couldn’t really know.

For Gopin, the ECMO search results were all he and his siblings needed. “We were prepared for the worst,” he told me. “And then you come up with this ECMO, and we all said, go ahead and do it already.”